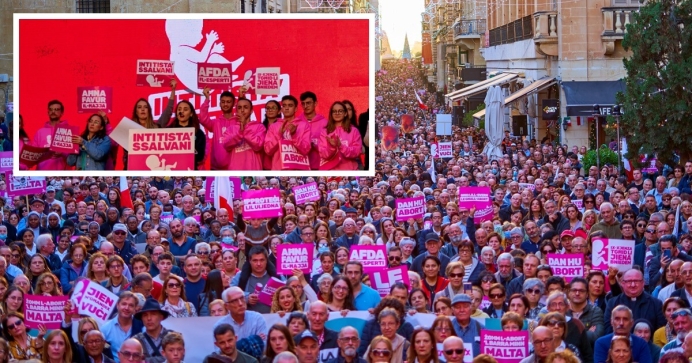 20,000 take to streets of Malta to demand Government not introduce abortion

(Right to Life UK) Over 20,000 people marched through Malta’s capital, Valletta, on Sunday afternoon, protesting the Maltese Government’s decision to table a bill that would introduce abortion to Malta.

The demonstration was one of the largest protests in recent Maltese history, showing that the deeply pro-life people of Malta were willing to take to the streets en masse to keep abortion out of Malta.

To put in perspective how big a turnout this was, a turnout from the same proportion of the population in the UK would see over 2.6 million people take to the streets of London – the largest protest in UK history, the 2003 Stop the War protest, had an estimated 1.2 million turnout in London.

Campaigners gathered in Castille Square and adjoining streets on 4 December, placing a large banner of a newborn baby on the stairs leading up to Castille, the office of the Maltese Prime Minister. The demonstrators then proceeded to Republic Street, led by former Maltese president, Marie-Louise Coleiro Preca.

“No to abortion, yes to life”

The crowd chanted “Viva l-ħajja, le għall-abort” (long live life, no to abortion) as they marched through the streets of Valletta. Addressing the crowd, the former President said “We appeal to the government to meet with experts, civil organisations, to discuss with the stakeholders and to take note of the position paper”, referencing the paper signed by over 80 academics expressing “grave concern” about the proposed law.

Tweet This: "Long live life, no to abortion" - chants of more than 20,000 who marched through Malta's capital to protest abortion

She urged members of the media to reflect “the rights of the mother and the child that is without a voice”.

Retired judge, Giovanni Bonello, said that this new law would open the door to “abortion on demand”. He argued that nurses, doctors and women were adequately protected under current legislation.

He also said “No nurse, no doctor, or woman was taken to court because the pregnancy was terminated to safeguard the mother’s life”.

The Maltese Government earlier indicated that it would introduce a change to legislation that would have been limited to codifying into law the current practice where physicians remain free to intervene in cases where continued pregnancy is thought to be a threat to the mother’s life. In such cases, doctors can act to save the life of the mother, even if this results in the undesired death of the child.

However, the Bill, which has received a first reading in the Maltese Parliament, goes much further than simply codifying current practice into law. Instead, the proposed amendment includes legalising abortion to protect the health of a pregnant woman who has medical complications that “may” put her “health in grave jeopardy”.

This wording is very similar to the “risk of injury to health” language that is used in the UK’s Abortion Act, which was passed into law in 1967. While this appeared to UK Parliamentarians at the time to be narrowly drafted to permit abortion in very limited circumstances, in practice the inclusion of this provision has allowed for widespread abortion on demand to occur in England, Wales and Scotland.

Statistics from the UK Government’s Department for Health and Social Care show that in 2021, over 200,000 abortions were performed under the ‘health’ clause in England and Wales, accounting for 98% of abortions that took place that year.

The vast majority of the over ten million abortions that have happened in the UK since the Abortion Act was introduced in 1967 have been allowed under this same ‘health’ clause in the law.

A number of other jurisdictions globally have included similar ‘health’ provisions (including previous laws in states in Australia and New Zealand) that have, in practice, allowed abortions on demand in very high numbers to happen in those jurisdictions.

If the Bill becomes law, Malta will go from being the only country in Europe with full protection for the unborn child to having one of the most extreme abortion regimes in the world.

Dr Calum Miller, doctor and research associate at the University of Oxford specialising in abortion policy, said in a tweet “The government of Malta has announced a Bill allowing abortion for ‘health’ reasons. This is without any doubt an open gate to abortion on demand. Everyone who knows pro-life people in or from Malta should contact them now to alert them to this imminent danger”.

“For example, Great Britain legalised abortion only for health reasons in 1967, a law still in place. Yet 1 in 4 pregnancies in GB end in abortion, 200,000 a year. This is abortion on demand by stealth”.

Polling shows no support for introducing abortion to Malta

Polling has consistently shown that Malta is one of the most pro-life countries in the world.

Right To Life UK spokesperson, Catherine Robinson, said “The Maltese Government has broken their electoral promise by introducing this extreme abortion law. The people of Malta have made it very clear that they do not wish to see their pro-life culture eroded by introducing abortion to Malta.”

“It is inspiring to see the number of people who have joined the rally in Valletta. Many of our elected officials would like to pretend that pro-lifers do not exist, but as the rallies in London, Valletta and Dublin demonstrate, this is not the case.”